The seventh course of Inhabited Theater is coming to an end and, as has been the tonic hatibual, the samples of each group will be in charge of putting the finishing touch to a year full of learning, creativity and enthusiasm. And work and effort, how could it be otherwise! 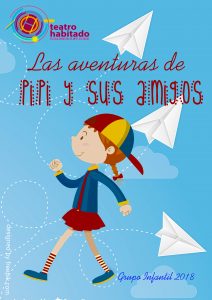 The first group to exhibit their work will be the Children’s on Sunday, May 27 at 8:00 pm at the Theater of the Villa del Conocimiento y las Artes, under the direction of Silvia Beaterio, with Las aventuras de Pipi and her friends. This work is a song of freedom, imagination and childhood. Pipi, a nine-year-old girl, of a crazy, brave and funny character, discovers to everyone the beauty of “being children”. 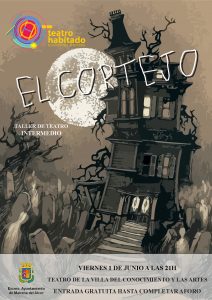 The next appointment will be on Friday, June 1 at 9:00 pm in the same place. El Cortejo, the final work of the Intermediate Group led by Sergio Capitán and Cristina Mateos, will show us the encounter between two families that will unlock secrets never revealed, truths never mentioned before. Be welcome to a night of heart attack, where romance, anger, lies and truths abound. Only one thing is clear, and everything is going to change, be prepared!

This first round of exhibitions will end on Sunday, June 3 at 8:00 pm also at the VCA Theater with the Adults Group and Silvia Beaterio’s address again with That work you are talking about, a political satire , an acid look at the putrefaction and corruption present in our society. In a humorous way, some colorful characters appear, agitated and scrambled after hearing the news of the arrival of a high official: the inspector. Vices, irregularities and corruption, a carnival of nonsense where reality exceeds fiction.

We encourage everyone to accompany our students in these important events in their learning processes and the arropéis from the stalls. See you at the theater!