The second edition of Cultura Viva rewarded the Mairenero Meeting. 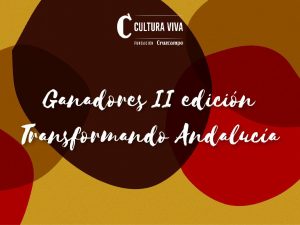 Cultura Viva, organized by the Cruzcampo Foundation, is a call for aid to cultural initiatives that pursue social goals. Through it, they aim to promote the culture that creates social value and which are committed to the cultural, economic and social development of Andalusia.

Emergentes has been awarded in the avant-garde category, as a contemporary initiative focused on achieving social changes through new formats and cultural languages, revolutionizing forms or artistic contents to propose new visions of reality that generate changes in mentality and set trends.

The Cruzcampo Foundation supports the Encuentro as a contemporary project conceived in Andalusia but open to the global market, which raises new visions of reality, generates changes in mentality and sets trends for the future.

After having received this distinction last year being one of the ten awarded projects from more than two hundred proposals submitted, Emergentes returns to take the trust of the Culture of Life jury for the seventh edition of the Meeting that will take place between 26 and 29 of July.